This temple is located in Deshnoke, 30 kms  from Bikener, Rajasthan.  This is famous as Rat Temple. The rats are very sacred in this temple. There are many 1000s of rats here. These rats are considered as holy and not as pests. It is believed that there are around 20,000 rats here. They are seen everywhere. Neither the rats nor the devotees are scared of each other. Devotees and rats share a special bond. These rats are known as Khabas. They offer prayers to these rats. The Prasadam is first offered to the Khabas and only then to the devotees.  This place is free of Plague or any other contagious diseases.  There is a popular belief that the rats are the incarnations of dead ancestors of Charan clans and when rats die, they are born as humans. The Karni Mata protects these rats. They are considered as the holiest rats. Although, there are around 20000 rats here no one to this date has seen any baby rats. Any given day, they all are of same size, shape, weight and height. There are many white rats as well. They are considered as the holiest and pure Khabas.

No other temples have these many rats anywhere. This temple is always filled with devotees. When these rats climb on you or have your prasadam it is considered as blessings. If one kills a rat here, one needs to replace it with a gold or silver Khaba of same size, shape, height and weight.  When rats die, they usually produce a foul smell and this is an universal truth, however when rats die here, they do not produce any foul smell at all. There is no foul odor whatsoever. When a Rat dies there will be a birth in her tribe. This is beautifully timed. This is definitely a wonder. Rats became sacred in her temple when Karni Mata's stepson Laxman drowned in a tank he was attempting to drink from. She negotiated with the god of death-Yuma. She wanted to revive the child. However, the lord Yuma refused to process her request citing that the diseased boy has already taken a rebirth. Karni Mata then comes to an agreement that all the people of her tribe when dead should be born as rats before taking another human birth. Yuma gave his nod. Hence all the rats here are considered as diseased ancestors. The Karni Mata protects them all. 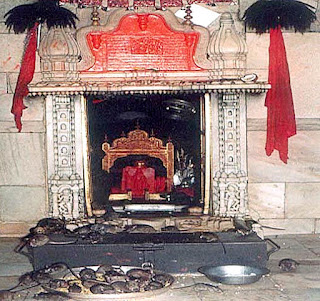 Karni Mata was born on 2nd October 1387 in Suwap, Rajasthan. She was the 7th child of Mehoji Charan and his wife Deval Devi. Her real name was Ridhubhai. When Karni Mata’s mother wanted to abort the baby she simply could not. Goddess Durga showed up in her dreams and informed that the child is an incarnation of herself. When Ridhubhai was just 6, she cured her relative off of a deadly disease, hence she was known as Karni. At a very young age she was married off to a wealthy man-Dipoji Charan of the village of Sathika around AD 1415 but did not live a conventional "married life." She was not interested in worldly affairs. She desired to live a saint’s life. Karni put forth a proposal to marry her younger sister Gulab, and subsequently processed with it. Goddess Karni Mata came from Charan clan. She lived for 150 years and remained young and beautiful. After her death, she became a rat. The Charan clans believe that once they die, they too will be reincarnated as a rat and subsequently, when a rat dies, it will be reincarnated as a human again.
She is believed as an incarnation of Durga. She was the goddess Bickner and Jodhpur Kingdoms.  She had blessed them with prosperity, peace and good health. To this date there is no outbreaks of any epidemics in Bickner in spite of having that many rats!  Ganga Singh Bickner built the temple in the 15th century. The temple is heavily influenced by mogul architecture. The entire temple is built with beautiful white marble. He also gifted a Silver door. Initially there were no idols or temple just few footprints. However, now the temple has a sacred sanctum, an idol where she holds a “trisul’’ and of course a lot of rats!!
Posted by Kamala R at 6:56 PM